EverSpark’s What’s New In the World of Google continued this week, featuring a great presentation on social media influencers and how to use them from Rich Spaulding, a discussion on Matt Cutts’ views on guest blogging and Jason Hennessey‘s return from Affiliate Summit and NamesCon in Las Vegas. EverSpark throws open its doors every week on Wednesday from 8-9:30am for professionals who want to know more about how Google works, as well as tips and tactics for improving their own sites.

Please join us at our next meeting on Wednesday, January 29th, 2014 by RSVP’ing on the Meetup.com link below. If you can’t make the meeting, it’s not an issue, as we provide catch up notes for every week on our blog. Take a look to catch up on any meetings you may have missed.

Jason returned from Las Vegas after visiting Affiliate Summit and and serving on a panel with Adam Dicker (Domain Expert) and Ruth Burr (Head of SEO @ Moz.com) at NamesCon. Interestingly, the panel was actually the subject of a live blog, written by Bill Hartzer, giving all who missed it a chance to catch up. Jason also learned some new facts he wanted to share with the group. Jason met with Duane Forrester, who is essentially the Matt Cutts of the search engine Bing, and had a discussion about search engine penalties. There had been a theory that if you 301 redirected your penalized site to another URL that the penalty wouldn’t follow. While this may temporarily work to beat the penalty, it was the opinion that in most cases the search engines would eventually catch up with you and penalize the new site.   One thing you should look into is disavowing any penalized material on your new site before the penalty catches up with you. While you will lose some link value, it may help to remove the penalty from your site. There was also a keynote presentation by Matt Mullenweg, the founder of WordPress, the Open Source software used by over 18% of the web. In this discussion, he went over how to get the most out of your WordPress site, including new plugins that are available. One of these that was discussed was Jetpack. With this new plugin, WordPress users have a whole host of new features to help improve both their site and their reader interaction and experiences.

Additionally, WordPress also offers plugins that can assist website owners and developers in migrating their site should they need to. Previously many people instead sought out industry professionals through sites such as E-Lance or oDesk to accomplish this. Now with plugins like Duplicator, which gives admins the ability to clone/migrate a site from one location to another, and Migrate DB, which exports your database, does a find and replace on URLs and file paths, then allows you to save it to your computer.

Using Google+ To Your Best Advantage

There’s a lot of talk going around that Google+ is the future of Google, and the more you engage with it now the more likely you are to reap the rewards later on. One of the most important things you can do is to increase your followers.

This technique is an unbelievably easy way to open the door to new networks and build new relationships. However, ensure you nurture the relationship a bit by sharing and +1’ing posts from your new contacts. You may want a social influencer to share your stuff, but they’re less likely to do so if you’re not sharing theirs.

As usual, Google just wants to be right and they ultimately want to see the right person get to the top of the list of what you’re searching for. For example, if you’re researching cancer, you’d rather get a result from a doctor who’s written a paper on the subject rather than a guy who’s written a piece that links to WebMD.

There is a current discussion going around about getting your social media numbers right in order to be considered an authority, and therefore a social influencer. While some feel it’s important from an SEO perspective to have more followers than people you’re following, where others may just want to spread their content far and wide and are unconcerned with having a lopsided follower/following numbers. You may be able to create two Google+ pages that can follow each strategy and see which one works out better for you. Essentially, there is no right or wrong answer. SEO is an art, everyone has their own objective or opinions.

EverSpark’s Senior Account Manager, Rich Spaulding, presented the in’s and out’s of social media influencers and how you can use them to increase your social media scores and online presence.

What Are Social Influencers?

Essentially, social influencers are like the “cool guy” at the party. Everybody wants to know him and hang out with him, and therefore his opinions carry more weight. They are generally someone with social media authority and power in a particular niche or vertical. Social influencers share interesting stories, breaking news, or strong opinions that are often controversial.

What Do Social Influencers Have In Common? Essentially, social media influencers are the “cool kids.” Though we can’t all be one of the cool kids, we can certainly be friends with them. By being friends with them, others will take notice of what you’re doing. When a social influencer shares your content, they’re ultimately pointing you out at the party and saying, “Hey, this guy is cool too!” When this happens, you’ll see their followers start to follow you and also share your content.

When you’ve decided you need to latch on to a social influencer, how do you go about finding the best ones for your particular niche? Luckily, you don’t need to go digging around to find the best people to follow. By just using a few clever online programs, you can discover not only who to follow, but what your social media picture is looking like and what direction to take your content.

Currently in beta, BuzzSumo helps you to look at a keyword and see how it is trending. It picks up the latest content across the web and tells you what’s happening right now, as well as who’s talking about it and what social influencers are sharing it. Not only can it tell you what are the popular discussions are regarding your keywords, but it can also break down each piece by the total number of shares. Use BuzzSumo.com to find shareable, relevant content and to also help ascertain what topics related to your keyword are currently popular, allowing you to shape your blog in that direction.

For example, EverSpark recently discovered a great piece by MOZ.com featuring a free beginner’s guide to social media to share with the group by using BuzzSumo to monitor topics in that genre.

Klout.com allows you to find out just how influential a person is on social media. Using an algorithm, the online program calculates an overall “score” for an individual based on their participation in social media, their follower rates and how often people are sharing their posts. With this in mind, it appears to be important that you have more followers than people you follow. When your follower/following ratio is lopsided, it can cause your score to drop. Additionally, you can find out how many of your followers are considered social media influencers.

How Does Social Media Work For Social Influencers? 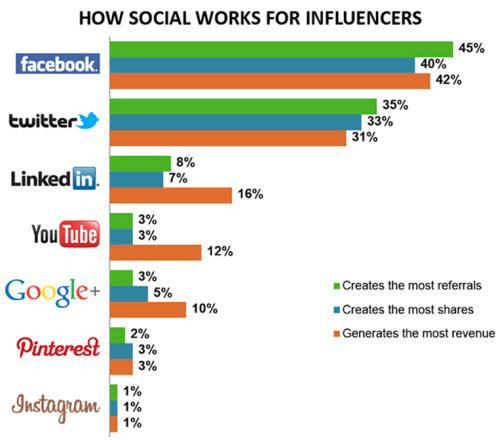 A Quick Example of Using Social Influencers To Your Advantage

A great example of using social influencers to your advantage comes courtesy of HomeBuyerNation.com. After seeking out the top social media influencers in their market, they simply made an opportunity to seek them out and ask them to comment on their top tips for first time homebuyers. This was then turned into a blog post which was in turn shared with these social influencers to their networks, thus driving traffic to the site and building brand recognition in the marketplace.

This past week the Internet was all abuzz with the news that Google webspam guru Matt Cutts had suggested in his most recent blog post that guest blogging was actually a practice you shouldn’t be engaging in if you’re looking to build links and improve your SEO. Obviously, guest blogging is a common practice for many websites, so it’s easy to see why it sent shockwaves through the online world.

Jason went on to counter that guest blogging was not going to die out anytime soon, but that Google was rapidly getting better at determining the difference between good and manipulative guest blog posts. If your guest bloggers are writing properly and adding value to your site, then you’re engaging in good practice and should have nothing to worry about. The essential element is getting the ratio right. For example, if you are regularly updating your site with original, quality content, 2-3 guest posts per week should not affect that. Ultimately, you want to keep your own original content on a higher ratio to your guest bloggers.

The key take-home point is it’s not just a case of how good your post is. Even if you’re enaging in great guest post blogging practices, you might be in bad company with other blogs on the site. If the other posts are highly spammy and irrelevant, you’re likely to get your guest blog lumped in with that. If you’re a regular contributor to a certain site, use Google+ to add yourself as one. At the end of the day, the intent is important. If you’re blogging just for SEO, then it’s not worth it. If you’re crafting a high-value message, then it is.

Try to think about the quality of the links, the content and the amount of work that’s been put into it. Would your users be happy to land on that page? If your blog is terrific and it links out to a good site, it looks more natural to search engines. Allowing totally unrelated articles that link out to spammy sites onto your blog can often mean death by association when it comes to bad practice. Try thinking about links as “votes.” When you have one on your site, you’re essentially endorsing it.

How Can You Guest Blog Without It Appearing That You’ve Paid for Links?

If you’re paying for links, then it more than likely doesn’t go with the blog and it will have loads of anchor text. Good guest blogging will show why you’ve invited them to blog for you, including a bio that shows why they’re there. There is a spectrum where Google tries to distinguish what’s high quality and what’s spam. Guest blogging seems to be the flavor of the month. To do it well, you should do it occasionally and not all the time. The trick is to always keep your ratios right. When you’re just starting out, Google’s guard is up. You have to earn that trust. If you do nothing but guest blogs, then you’re probably not going to rank.

What Should You Be Aware of If You’re Considering Guest Blogging?

Those who are looking for some additional opinions and information on guest blogging should also take a moment to watch Rand Fishkins Whiteboard Friday video on the subject, as well as watch the following final thoughts from Matt Cutts.

See everyone next week!

KPMG to Transition from .com to .kpmg – Savvy Digital Strategy or SEO Crapshoot?